We do not have a vested interest in saying that the off-gassing of the tires is a “non-issue.” We do not believe that your health is a non-issue. Neither do the countries that have banned the use of tires in buildings. Because of laws prohibiting the use of tires, groups like Earthship Belgium are using earthbags instead of tires for their Earthships.

Just a few months ago, the tire off-gassing issue was raised again when The Washington Post did a story on a number of soccer goalies who have contracted cancer. Scientists and doctors began studying the unique subgroup, which led them to pose a link between the incidents of cancer and goalies who had played extensively on athletic fields paved with a form of AstroTurf that used crumb rubber from recycled tires in its makeup. While in its early stages now, this may ultimately prove to be fruitful research to the tire off-gassing issue. 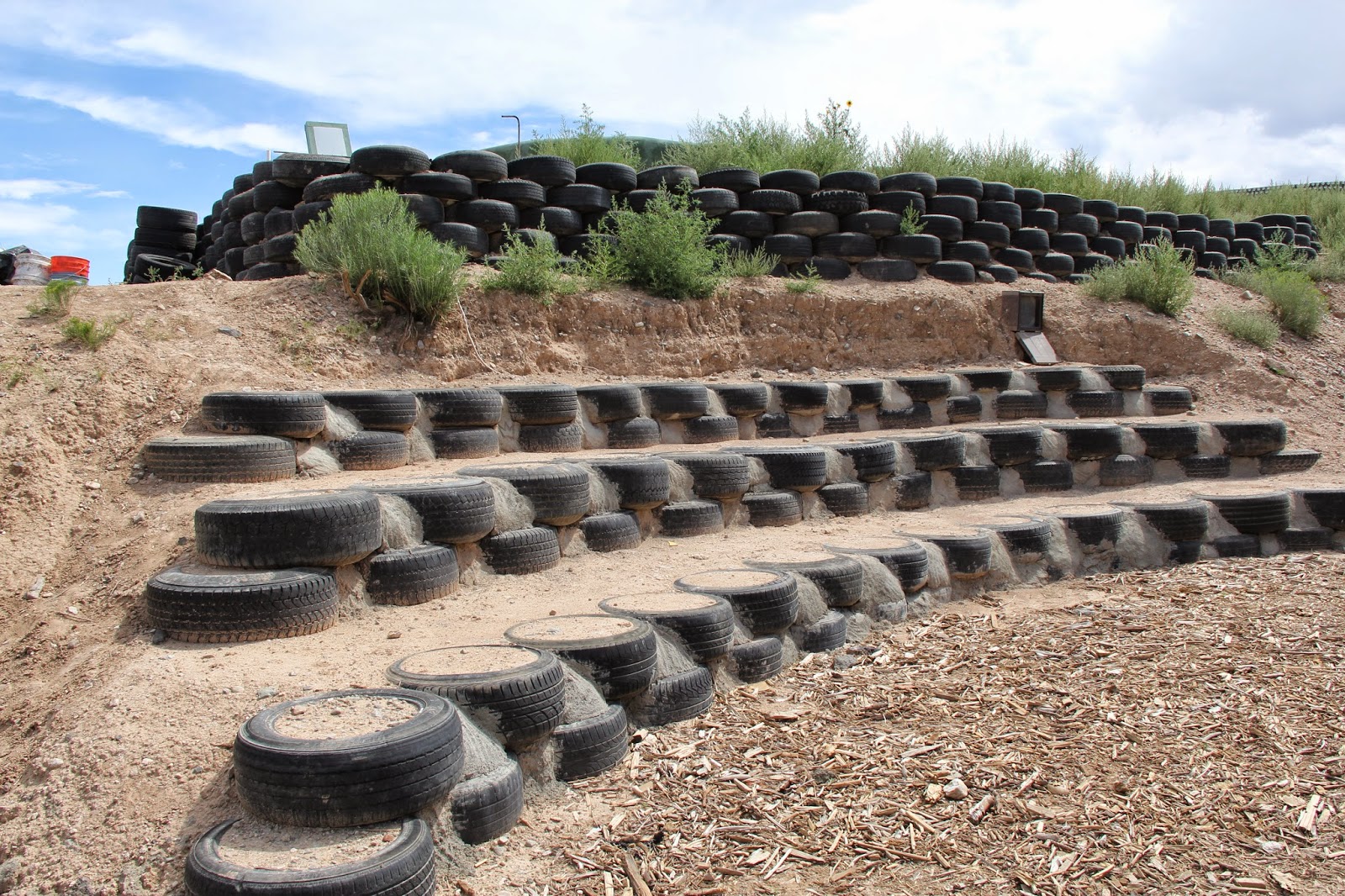 Here is what we DO know, from the scientific studies and best practices promoted by experts in the many fields which influence our assertion that the tires are dangerous, so you can decide what works for you!

The laundry list of volatile chemicals used in tires is alarming:

plus heavy metals that include

Organic compounds in tires break down more quickly than the vulcanized rubber. Criteria which determine breakdown rate include: heating, friction (from movement), water trapping and freezing, and evaporation of plasticizers.

But here is where it gets REALLY interesting. Here are scientific studies done for several different materials, all of which are constructed of recycled tires.

According to the EPA report, “Scrap Tires: Handbook on Recycling Applications and Management for the U.S. and Mexico” from December 2010

“These (tire) piles pose a public health concern. They are breeding grounds and havens for mosquitoes and other vectors, resulting in the spread of dengue fever, yellow fever, encephalitis, West Nile virus, and malaria. Improperly managed in stockpiles, in illegal dumps, and scattered along road sides, scrap tires are a significant border environmental problem as a result of the leaching process, fires hazards, and water contamination. Once ignited, tire fires are difficult to extinguish. When water is applied to fight the fire, serious air, ground water, and surface water contamination may result. Toxic emissions from tire fires, such as sulfuric acid and gaseous nitric acid, can irritate the skin, eyes, and mucus membranes, and can affect the central nervous system, cause depression, have negative respiratory effects and, in extreme cases, cause mutations and cancer.”

This 2008, but constantly updated, report from Artificial Turf: Exposures to Ground Up Rubber Tires - Athletic Fields, Playgrounds, Garden Mulch by the firm Environment and Human Health, Inc. for the Canada version of the EPA.

“The metals zinc, cadmium, and lead were also identified as contaminants from tire rubber released into ground water. With the exception of zinc, there are insufficient data to assess the health or environmental risks of any of these metals. It appears clear that the zinc levels are high enough to be phytotoxic if they enter the ground water or soil. It is doubtful that there is any human toxicity from zinc at the levels reported, but such a conclusion would have to be tested by more careful study.”

“The particulate exposures due to tire dust and chemicals contained in the dust that can be released in the lungs are especially troublesome. Nearly every test adequate to assess the risk that was reported found one or two dozen compounds released from particulates. There are processes in the body that can release the chemicals contained in the rubber particles. Moreover, potent carcinogens are found in the tire dust. Only the assumption of limited exposure could support the conclusions of low cancer risk.”

“Natural rubber alone poses a dangerous fire hazard and when heated to decomposition emits toxic fumes of SOx. Base materials used in polymer rubber production, such as butadiene and styrene, are suspected human carcinogens, and many of the polymer additives can cause systemic toxic effects.”

“Isoprene is a mild toxic by the pathway of inhalation. It also reacts with air and ozone to form dangerous peroxides. Butadiene is a confirmed carcinogen and teratogen in animals and a suspected human carcinogen. Inhalation of high concentrations of butadiene can cause unconsciousness and death. Human systemic effects of butadiene by inhalation include coughing and hallucinations. Styrene is a suspected carcinogen. It has been found to be poisonous by ingestion, inhalation, and intravenous routes.”

“Zinc oxide is added to tire rubber at relatively high concentrations. Zinc oxide is moderately toxic to humans by ingestion. Some human systemic effects associated with the inhalation of zinc oxide are chills, fever, tightness of the chest, and coughing.”

This 2008 report from Liberty Tire, which states, specifically about off gassing:

“The 2007 EEDEMS report mentioned above raised concerns about health effects on the crews installing crumb rubber athletic fields in poorly ventilated indoor areas and recommends a minimum air renewal rate of 2 vol.h-1. A 2006 study conducted in Norway drew a similar conclusion… These recent findings are consistent with those of a 1999 Taiwanese study that identified temperature and age of the recycled rubber material as the primary factors in VOC emission rates.”

And then you read statements from industry professionals dealing with tire decompositions in their everyday lives, who say things like…

“While the levels of chemicals off-gassing from indoor play spaces was considered below the threshold where the chemicals are harmful, it is worth noting that indoor spaces showed up to ten times as much volatile chemicals in the air. If you want to err on the side of caution, you may want to consider refraining from using recycled rubber mats indoors, where there is a minuscule but present danger that could deem recycled rubber unhealthy.” in “Are Recycled Rubber Mats Unhealthy?” by Lara Stewart at BrightHub based on the research noted in the first report we suggested reviewing.

“Minor off-gassing is an issue with rubber flooring. The gasses have an odor but will not release hazardous chemicals. In some cases, products with recycled content are included with caveats regarding where they should be used. Rubber flooring made from recycled automobile tires is a good example–the caveat is that these products should not be used in most fully enclosed indoor spaces due to offgassing concerns.” from “Building Materials: What Makes a Product Environment Friendly?” at Earthwise.com

“Do not use rubber flooring, such as that made from recycled tires, in enclosed areas because off gassing can continue for years.” “Healthy Indoor Environments” at The Sustainability Project.

But then, to be fair, we cannot ignore this archived, undated, report from Humbolt State University, which addresses the risks in earthships directly.

“Reusing our worn out tires is of course better than throwing them into a landfill, but many of the current reuse applications found in our society come with significant environmental impacts.

“One appropriate use for old tires is in Earthship homes.  A question we frequently receive … is if the tires used in these projects pose health risks through offgassing or chemical leaching.  ’it depends’.

“The specific constituents contained in a given tire (e.g. arsenic, aluminum, cadmium, chromium, manganese, mercury, lead, sulfur, and zinc) are dependent on the tire’s type, age, and manufacturer.  The location in which the used tires are placed is a critical factor that determines how much of each mineral constituent is leached.  Tires decompose when exposed to high temperatures, sunlight, or oxidizing agents.  None of these elements are present when a tire is packed with soil and surrounded by a stucco barrier inside an Earthship.  That being said, the tires used in Earthship walls are of minimal risk to inhabitants because they have little potential to decompose.

“…used tires most likely do not pose a health risk if they are rammed with earth and sequestered in a location away from exposure to sun or moisture… EPA researchers have acknowledged that the current literature we have pertaining to the health risks that used tires pose is incomplete, and that further study should be conducted before used tires are used in applications where humans are exposed.”

Once you have read some of these reports, or just the excerpts we have included here… ask yourself, is it worth the chance you take? If your answer to this is yes, Part 2 of the book has suggestions for making them work. If the answer is no, then Part 2 will also offer viable alternatives!