Since our work on the stabilization of the First Unitarian Church in ABQ’s Alexander Girard Mural, and our current work at St Johns College, we have had the opportunity to delve into more about Girard’s work and influence in New Mexico, including his extant sites, as well as his connections to John Gaw Meem and Georgia O’Keeffe.

Because we are currently getting so many requests for information due to the Vitra exhibit A Designer’s Universe, which showed at the Museum of International Folk Art, here are quotes from some of our writings, tours, and talks to help you find your way! 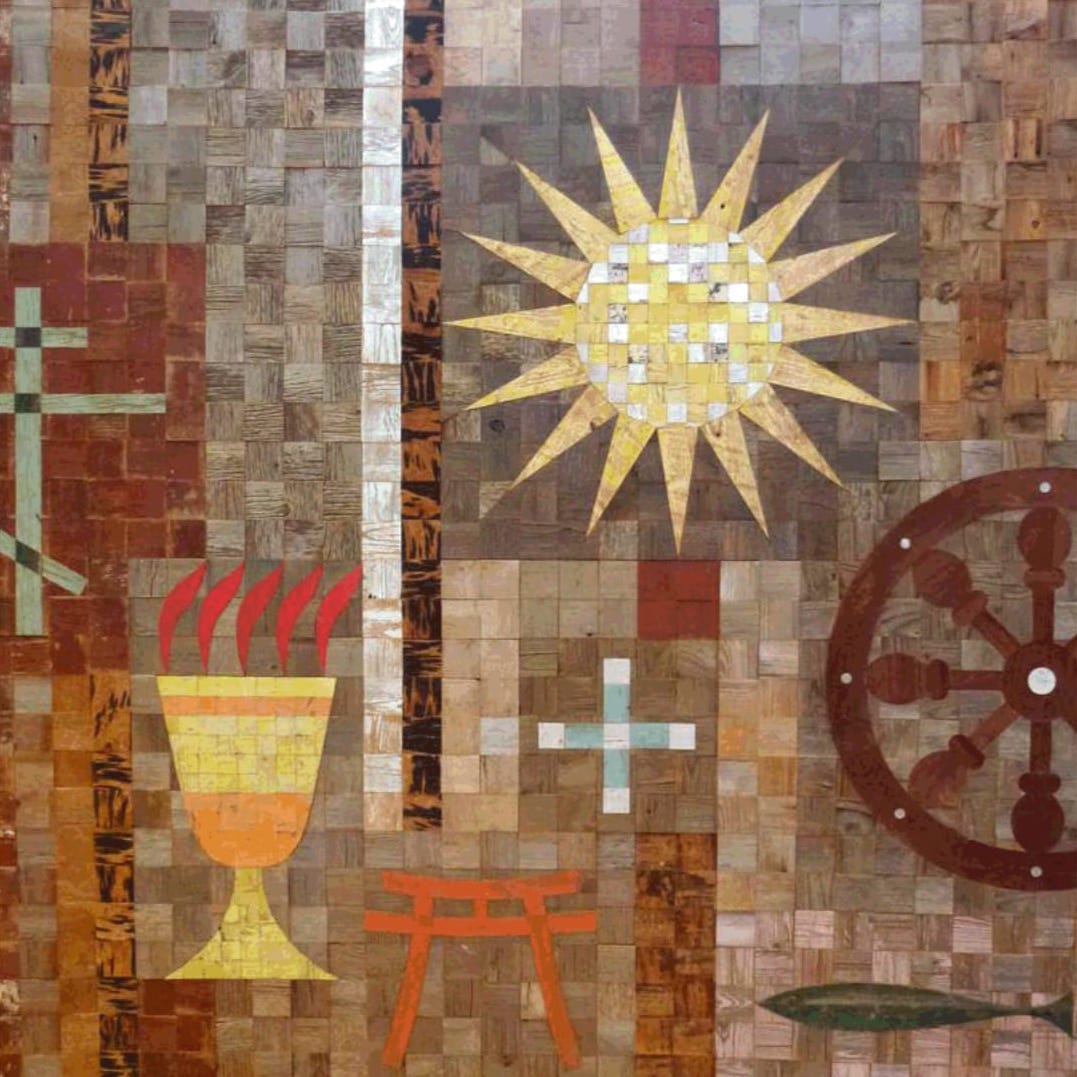 … I did not know that the mural was already threatened. Dozens of tiles were loose, and any vibration would shake them to the floor. Construction on the new sanctuary a few hundred feet away was about to begin. Once they started installing foundations, with those kinds of vibrations, it was clear that we could be looking at thousands of problems. So we set about documenting the mural. Working as if it were an archaeology site, we laid a grid over it so that the rows and columns of tiles were each labeled with numbers and letters. A team of congregational volunteers jiggled each tile as if checking for a loose tooth, then removed any detached tiles and made a pencil notation on the upper right hand side before returning them to their correct locations, so that we would know where to put them back when they fell. I interviewed conservators from MOIFA and Marshall Girard, who had helped his dad collect and prepare the wood for the installation. This offered us an exceptional glimpse into Girard’s intent and techniques for using wood from barns and stockades all over the Sandias to tell the church’s story. Dozens of plastic boxes were donated to transport each column’s worth of tiles to the new sanctuary, and the church hired a professional art contractor to remove and re-install the mural. The final result is an even more breathtaking view of the mural in the larger, lighter new sanctuary. 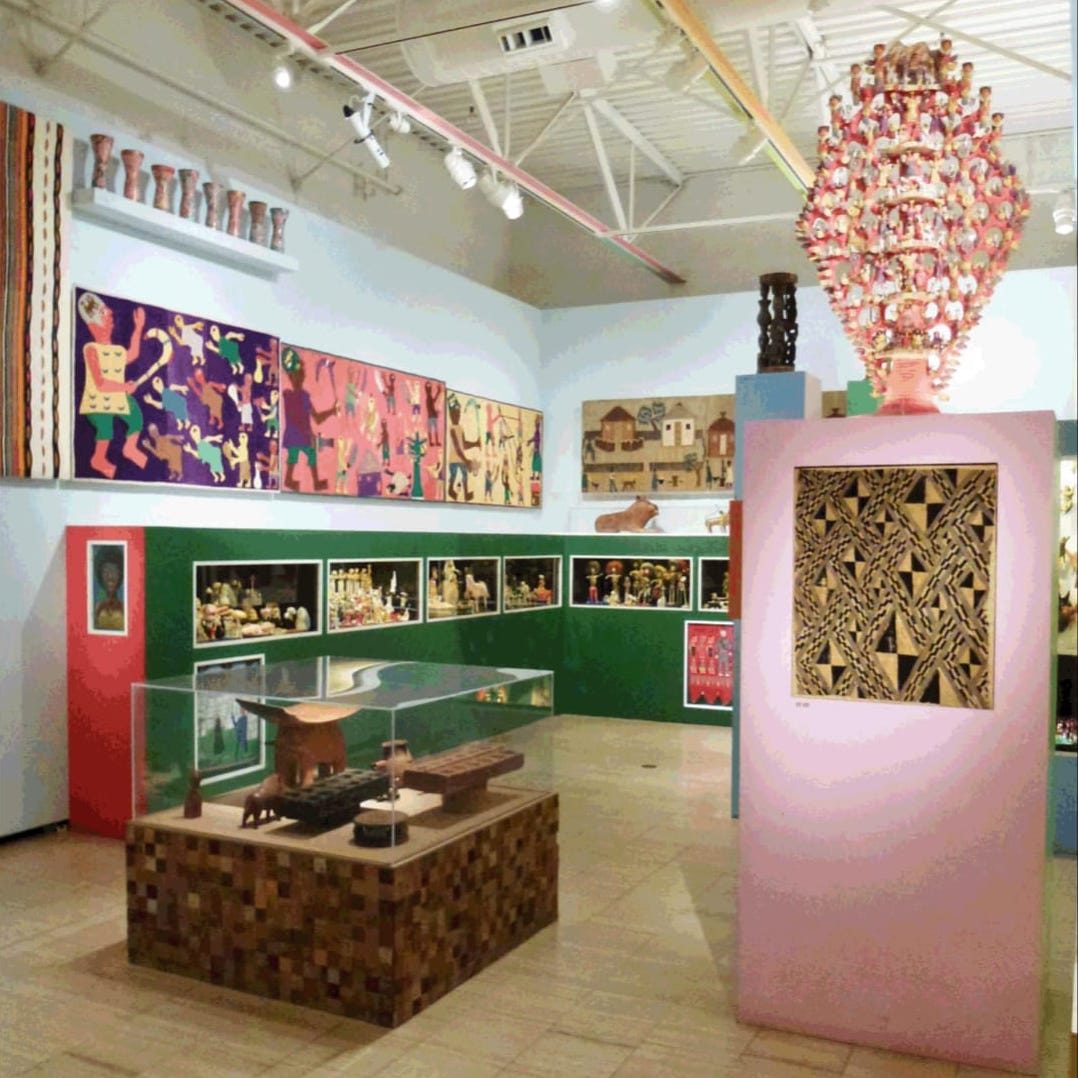 Girard’s design for the Multiple Visions: A Common Bond exhibit at the Museum of International Folk Art in Santa Fe showcases nearly 10,000 of his and Susan’s folk art pieces. The exhibit, located in an addition to the museum’s original John Gaw Meem structure designed by Harvey Hoshouer, first opened in 1982 and captivates with unique displays that engage not only the art itself, but our response to it, asking us to confront our intellectual and emotional mindsets by illuminating ideas of sameness, difference, and perspective. In placing the collection’s multitude of objects into unexpected arrangements, or locating pieces in places we may not have predicted and not explaining any of it, Girard seems to suggest that color, pattern, and language—and therefore ideas—are perhaps more fluid than we may have believed. As if illustrating this, the entrance to the exhibit quotes an old Italian proverb often quoted by Girard: “Tutto il mondo è paese” or “The whole world is hometown.”

read more in our Trend article 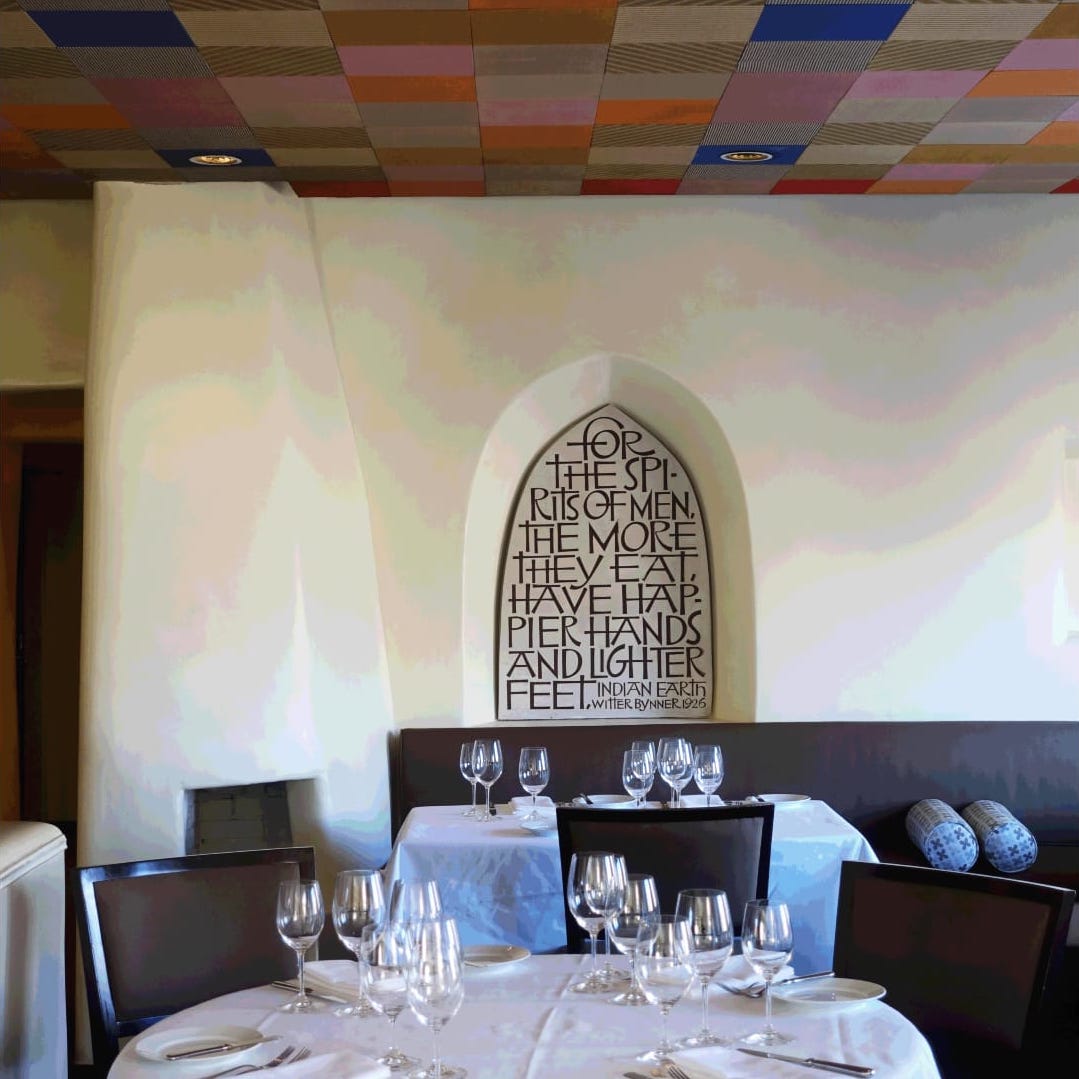 Ten years after moving to Santa Fe, restaurateur Bill Hooten approached Girard to renovate the main house of the McComb residence on Canyon Road into a restaurant. In the 100 years since it had been built, the residence had grown from a single room into a sprawling complex of buildings, inspiring the apt naming of the new restaurant—the Compound. Leaving the blended Spanish Pueblo Revival and Territorial architecture of the exterior and the walled courtyards and gardens alone, Girard added only a simple front entrance portal. On the interior, he dismantled the maze of tiny rooms, opening up the space to create an axial arrangement of dining rooms along one side of an open hallway and a bar and exterior patio along the other. He replaced a load bearing wall with a tree trunk, angled the bancos to create personal dining niches, and sunk the bar — a reference to the conversation pit he invented and installed in his own home nearly ten years before.

Girard was playful in the way he treated the whitewashed rooms. For decoration, a patchwork of Mexican and Navaho weavings “tiled” the flat ceilings of one, while a ten-foot-long painted snake undulated to dramatic effect along another. Three-dimensional murals and inlaid wood doors were added throughout, and he decorated niches and stands with pieces from his own folk art collection. Girard designed the table settings as well, placing white china against crisp ecru tablecloths, finishing the bancos in faux leather, and designing a curvilinear white oak chair for additional seating. And again, he designed a personalized alphabet for the menus and signage. When completed, Architectural Forum deemed the Compound, “The Town’s Newest and Best Restaurant.” Today, it is the last of the Girard-designed restaurants in operation, and nearly 50 years after its opening still maintains a reputation for exceptional dining and service.

read more in our Trend article 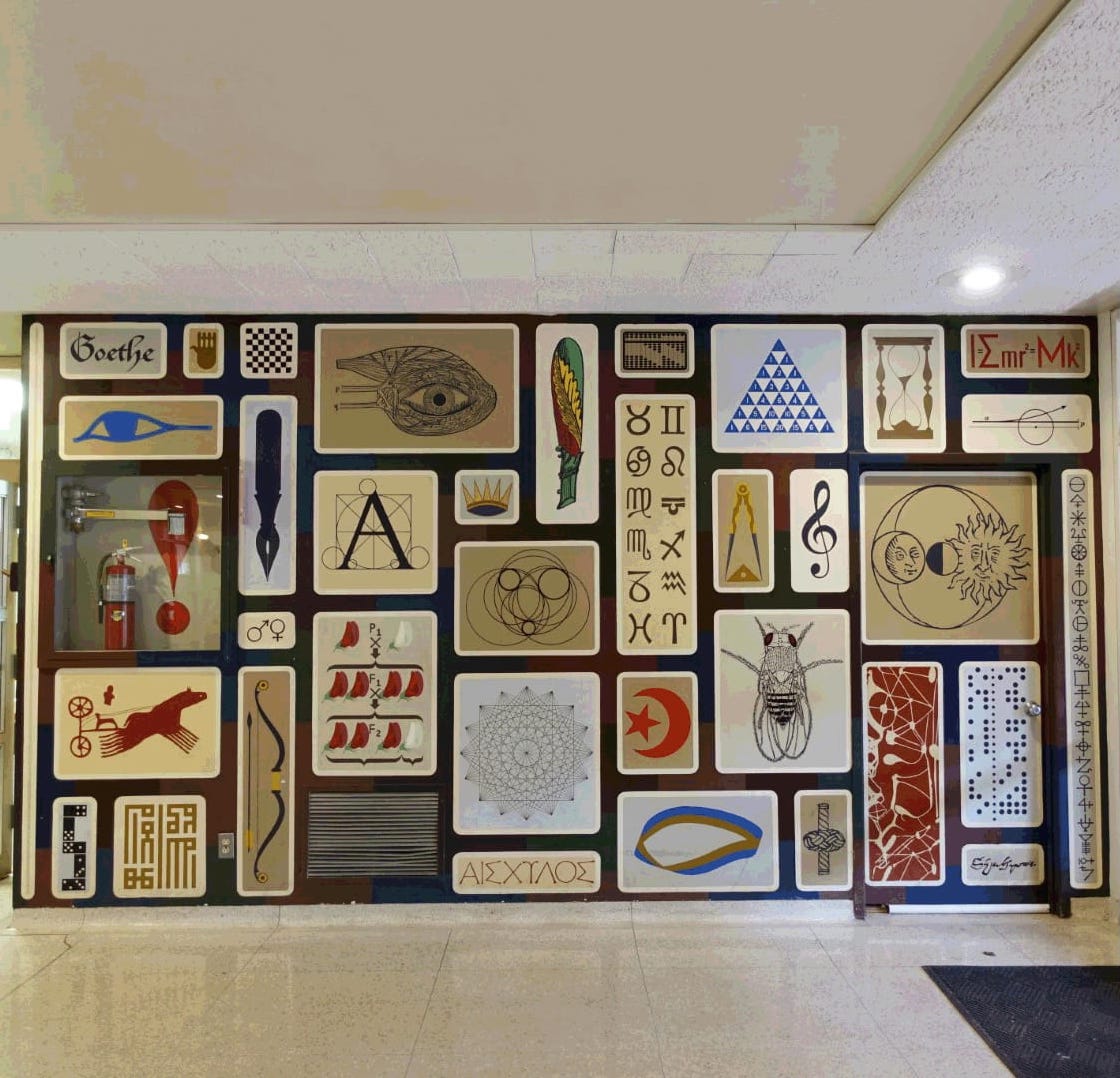 John Gaw Meem brought Girard into design furnishings and décor for St. John’s College’s Peterson Student Center in 1964. Girard produced a simple interior with mostly white and neutral tones, wood finishes, pops of color for special spaces, and vibrant intermingling colors on doors. Girard’s painted mural of thirty-six symbols beside the main entrance expresses the college’s liberal-arts values. (And the mural has one mistake!) The Center is open to the public can be visited during the day.

See the list of talks and articles Rachel Prinz has done on Girard.